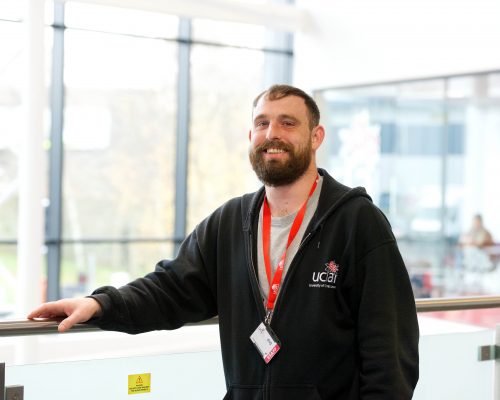 Paul is a Researcher at the Burnley campus for the School of Social Work, Care and Community. He works on projects with community stakeholders and families in developing interventions that challenge commonly perceived views of higher education.

Paul has been working on the Equality Challenge Unit ECU Project. The purpose of the national project is to pull strands of data and research together to create a picture that will help inform policy and practice. The University of Central Lancashire are focusing on Muslim communities, Eastern Europeans and young white men from poorer socio economic backgrounds in Pennine Lancashire and peripheral areas. The project will terminate in December 2018 with a final dissemination conference.

The project will use an Emancipatory Action Research methodology, delivered by peer researchers or ‘animateurs’. The research process influenced by Freirean critical pedagogy based on dialogical vertical relationships between people, and the importance of stories shared empathetically within a democratic safe space. (Freire, 2007)Ledwith in her work on Emancipatory Action Research as Living Praxis discusses the role of the dominant narrative in shaping thinking and attitudes. (Ledwith, 2015) Within this context, we seek to give voice to a different narrative to Change the Story. Therefore, ‘Co creating knowledge in action in partnership with marginalised people, and that is relevant to the changing political context.’ (Ledwith, 2015)

In terms of getting these three target groups together, the Centre for Volunteering and Community Leadership developed Barrier Football. The project uses the EAR approach (Emancipatory Action Research) where people can share their stories empathetically within a democratic safe space. The barrier football project leads on from the ECU Project focusing on potential barriers they could face (raising awareness) and ways in which they can overcome them, for example using their social capital using those bridges, bonds and links they have already. More often than not, they will know someone who has been through similar barriers and can help them come up with solutions to overcome them barriers by reflecting on their own experiences. The F.A and Premier league are also looking into this project with the intention of rolling it out to Football Community Trusts around the country. His work is about creating a culture where Higher Education is viewed in terms of benefits rather than barriers.

CVCL organised a Paulo Freire conference in Cyprus where I had the opportunity to deliver a paper written on Barrier Football to academics from around the world.

Having taken part in the Community Leadership Degree Paul offers support and guidance to students in regards to assignments as well as running workshops on NVIVO Data analysis software, assignments, referencing and any additional support students may require.

Global Youth Solutions Leadership Program delivered as both a facilitator and curriculum lead nationally and internationally in Muscat and Niswa in Oman, Cyprus and schools around the Northwest.

CVCL’s task was to identify Social Enterprises, Community Interest Companies and Co-Operatives within the Lancashire area. Once identified CVCL then identified what it is they do in terms of work within the community, whom they employ and what barriers they face with the intention of offering support in the near future.